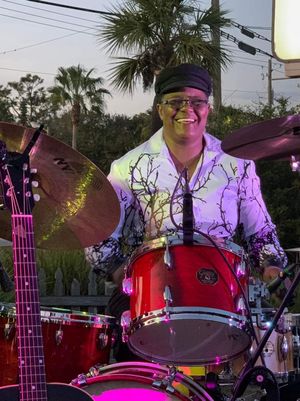 Our drummer currently lives in Statesville, NC but is originally from Torrance, CA. She has over 20 years experience as a drummer and percussionist. She has experience playing different styles of music from Top 40, Gospel, New Thought, Blues and Latin Jazz, Soul music etc.

Some highlights about Rochelle include playing drums under the direction of Alexander Hamilton for playwright Donald Welch; completing engagements of four of Donald's plays at the LA Wilshire Ebell Theater including "Let The Church Roll On" starring Marla Gibbs and Dorian Wilson, "Heaven Bound", Hallelujah Mahalia" and The First Lady of Zion. She has also played with The Anaesthetics on the Hollywood strip at Venues such as the Whiskey A Go-Go, The Rainbow Room, and the Alligator Lounge. She played with the incomparable Latin Jazz Aritst Bobby Rodriguez who gave her her first introduction into the world of Latin Jazz. This ignited an extreme interest in Latin music which led to Timbale lessons from world renowned drummer and percussionist Tiki Pasillas and Robertito Melendez.

Rochelle is a proficient drummer and percussionist and is often asked to join impromptu gigs  because of her ability to pick up and create arrangements quickly and easily.