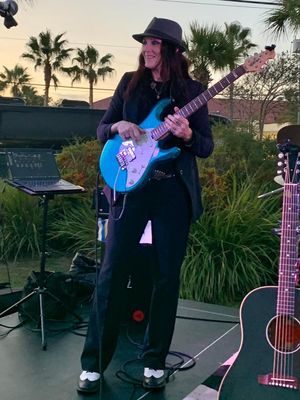 Our lead guitarist is a Charlotte native with a passion for music in all forms. She spent most of her career as a heavy metal guitarist. She started playing guitar at the age of 12 with influences including the Go-Go’s, Joan Jett, Black Sabbath and Iron Maiden. Kimniption founded and fronted the band Luna’s Lament in 2005. In 2008, she was voted best rock artist with the Women in Rock Award in Charlotte and Luna’s Lament was voted Best Rock Band. It was during this same time period that Kimniption needed the support of the music community most as she was battling breast cancer. The music community stepped up to host benefit shows to raise funds for her treatment, and the moral support she received as she ripped through shows while undergoing treatment was priceless. She will forever be indebted to the music community for kicking cancer’ ass alongside her. When she was approached by the CSB, she admits she was a bit hesitant as she was not sure how her heavier style would fit. Shredding leads in the world of heavy metal had been her norm. However, she stepped up to the challenge and began expanding her musical influences to develop a unique style blending genres into a perfect complement. Fans are loving the new punch to Christy Snow’s music!